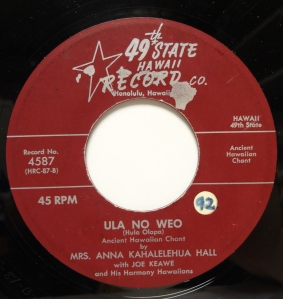 Did you ever pause to wonder what you are not getting when you buy a CD with a remastered recording like this one? Come to think of it, when was the last time you actually saw a 45rpm vinyl disk? Record labels are a source of valuable information. Take a look at how much is here. This record was made sometime in the 1950s or very early 1960s, so all of the information on this label reflects how terms for types of mele were used at that time.

Title of mele is “Ula No Weo.” This mele is widely known and taught to hula students. It was one of the cornerstone mele to demonstrate ancient Hawaiian dancing at the long-running Kodak Hula Show in Waikiki, and multiple recordings of the mele, as both ancient and modern hula, were included on Kodak Hula Show albums throughout the years.

Look at other information included. “Hula Olapa” appears in parentheses directly below the title. This is clear evidence that someone at the time of this recordʻs production combined the term “hula ‘ōlapa” with this specific mele.  ”Ancient Hawaiian Chant” appears twice—directly below “Hula Olapa” and above in the central part of the label—perhaps positioned up there as a marketing assist for record store and record department clerks? (Customer: “Can you help me find a record of an ancient Hawaiian chant?” Clerk who knows everything about the Beatles and nothing about Hawaiian songs: “Hmm, letʻs see … hereʻs one!”)

In fact, “hula ‘ōlapa” is a category that is a subset within ancient Hawaiian chant, and one of the attributes of “hula ‘ōlapa” is that some of the mele have come down into the present as both ancient chant and modern song. “Ula No Weo” is one of those mele. I call them “crossover mele,” because the same mele lives in both ancient chant and modern song versions. The presence of modern song (or even only aspects) in this particular recording does not invalidate the fact that part of the recording is, in fact, chant performed by Mrs. Hall with ipu accompaniment. This recording demonstrates clearly that what we call ancient and modern in the present did happily coexist within hula ‘ōlapa.

This entry was posted in hula, Songs. Bookmark the permalink.