Posted on February 7, 2011 by amykstillman

The second program in the series “. . . aia i ka wai . . . Dialogues on [the Present & Future of] Hawaiian Music” this past Friday yielded another rich rich rich set of perspectives. And two days later I have yet to compose in writing my initial thoughts, although I have already been talking story with folks who are asking me how I think things went. So more thoughts will be forthcoming.

There are numerous projects already in the queue for posting here, including parts 2 and 3 of Chaz Umamotoʻs Conversation with Brett Ortone, and Dave Bandyʻs interview with Zach Lum. More Adventures in Archives–what happens when my notes made 15 years ago do not include key information like the specific catalog # of the source I want to revisit now in Bishop Museum Archives. (Even researchers at the top of their game goof every now and then. At least when we do goof, we do it big time.) And more thoughts on conversations I am having with interesting folks, like Luana Maitland, manager of Outrigger Reef Hotelʻs Kani Ka Pila Grill, my collaborator Daniel Ho (whose music craftsmanship continues to amaze me–our phone conversation this morning ran rings around me with talk about harmony), and my houseguest Jordan Sramek, Founder & Artistic Director of The Rose Ensemble.

Tighten your seatbelts: GRAMMY Awards are announced in exactly one week, Sunday Feb. 13. This morningʻs New York Times Arts section has a feature article titled “Dear Grammy: Is it Hawaiian Enough?” It is an insightful and balanced piece on the politics that have ravaged the category for seven years running. Of course, I have been watching the situation unfold, year after year. My First Year Seminar class at University of Michigan last year did an excellent collaborative project of documeting  coverage in the media and on online forums. And, I am not a neutral observer, either. As co-producer of the 2008 award-winning CD, ‘ikena, I am in possession of a statue with my name on it. 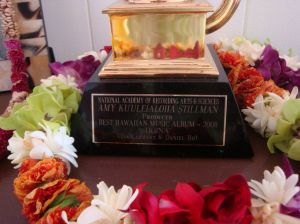 Attending so many performances in such a concentrated period of time brings many thoughts to mind. And the lightbulb moment–What we lack as a community is written commentary that is substantive and analytical. Commentary that engages with the spirit of creativity in Patrick‘s “hula mua” on “The First Time Ever I Saw Your Face,” or the absolutely delightful tribute to Hula’s Bar & Lei Stand–delightful because so many people could identify with it, and “got” so much of what Patrick was trying to accomplish in the production number. Note to self–develop a course on music criticism.

For not having a post on one particular topic, it is evident that there are so many ways to turn the prism on our appreciation of Hawaiian Music for Listening Pleasure. Stay tuned, dear Readers!

This entry was posted in remarks. Bookmark the permalink.